Whether you're embarking on an epic wine tour with friends or simply want to last an entire night of socializing and drinking with important people, there are times when good alcohol tolerance comes in handy. If you're a lightweight who would probably be labeled as a "cheap date" when it comes to drinking, you can actually increase your alcohol tolerance gradually by drinking more on a regular basis. Who would have thought?

Don't forget the other general drinking tips that you've probably already learned in college. Don't drink on an empty stomach. Drink water in-between drinks. As tempting as it could be, avoid mixed drinks with names like Adios Motherf*cker. And of course, drink responsibly. There is nothing classy about getting drunk to the point of vomiting—or drinking and driving.

Got your own tips for increasing your alcohol tolerance? Share with us in the comments below! 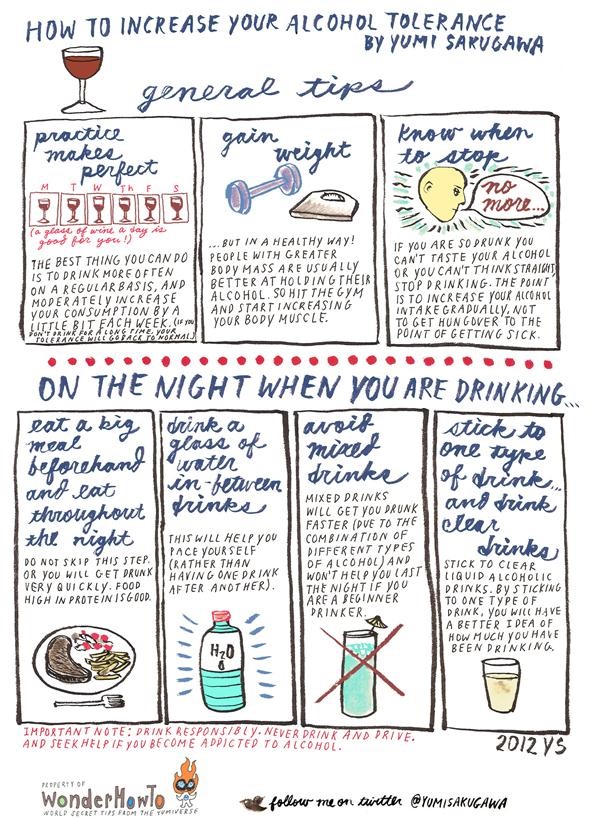 Want to master Microsoft Excel and take your work-from-home job prospects to the next level? Jump-start your career with our Premium A-to-Z Microsoft Excel Training Bundle from the new Gadget Hacks Shop and get lifetime access to more than 40 hours of Basic to Advanced instruction on functions, formula, tools, and more.

Other worthwhile deals to check out:

Join the Next Reality AR Community

Get the latest in AR — delivered straight to your inbox.

The "practice makes perfect" one is just stupid. I understand the logic, but training yourself into a routine of alcohol is stupid as the user will be so used to it, they won't know what to do when they aren't drinking.
I've got an alcoholic mate, and he drinks all the time now. He needs an excuse not to drink. And that has been attributed to by drinking frequently enough that it's almost a schedule.

Harmful addictions are (in my opinion) an exception to the "take enough of it, and you get used to it" rule. Like drugs, medication, etc - which should be in moderation.

I don't believe alcohol tolerance is ever neccesary. You're cheating yourself seeing you're not used to it. And you're not used to it because you don't do it everyday. Why go out of your way if you intend to only drink once?
By "training" to drink more, you're implying that you plan on doing it every weekend - which is just alcoholism.
If it's just for one night a few months away, ask yourself - is it really worth it?

Just stick to what you want. Don't be influenced by someone. They won't care about you the day after. You're their "temporary" entertainment.

If you must though, just eat something before, during and after.

Implying that just because someone drinks everyday (or every weekend, heaven forbid) that they will then "not know what to do when they aren't drinking" - Is just stupid. If you or someone you know is like this, then maybe drinking isn't the best choice for that person.

Drinking everyday is certainly a good way to increase your tolerance. Numerous people and cultures around make consuming alcohol part of their daily lives. That doesn't automatically make all people who choose to drink regularly alcoholics. It comes down to knowing your limits and making smart decisions - Exactly like what Step 3 of the article says.

Get off your high horse.

olso a nice tip to add "on the night when you are drinking": try to pick drinks with low % of alchool. (like a gordons space or a beer) with about 5% alchool in them. you can also go way up to drinks with 70% of alchool (like absinthe and some others)
generaly is good to know who much % of alchool votka, wine, tequila.. or any other types of alchoolic drinks have.

It is irresponsible to host a page like this. I'm not one for censorship, but in this case, I reckon the site should pull this page.

There many many more harmful DIY articles on this site than "How to Increase Your Alcohol Tolerance". If you don't want to, then don't - It's not a textbook solution, they are suggestions.

Thanks for sharing your opinions, everyone. I really appreciate it. I definitely do not want to turn beginner drinkers into full-on alcoholics with this post, and I don't believe in drinking for the sake of drinking (most of the times). I'm writing this post mostly for people (probably lightweights like me) who enjoy the taste of alcohol, not for the sake of geting trashed, and wouldn't mind increasing their capacity of enjoying good wine, good beer or good spirits just a little bit more in a responsible manner that is all about prolonging the enjoyment of the experience, not getting dependent on the substance or falling into a harmful lifestyle. Certainly, a good deal of self-responsibility and honest self-awareness is needed. Perhaps I should have communicated that clearer.

People need to lighten up. Yumi said don't drink too much right in the article.